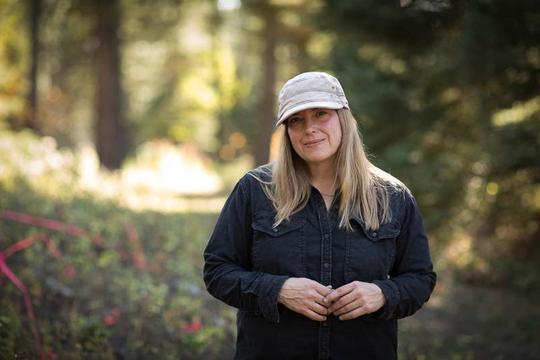 ​ My work has as much to do with the environment as with human kind-how we move through space both physically and mentally. The history of place along with the tensions that exist shifting perceptions inform my making. My installation Of Earth, Of Sky, Of Place Between is a marriage of concept, location and process.  The final form manifested from a direct response by making in the moment to embody the spirit of the region and its people. Part of working in nature is remaining open to where questions take one- bending at will - tempo rubato.

The original patterning was created by the act of freezing and applying pressure, striking-fracturing much like marks created by compression of stone and ice. This pattern regenerated through technology was then transferred to steel by the process of cutting with garnet in a high pressure stream of liquid-a guided erosion. The upheaval of ridges and creation of valleys were formed by pressure, impact and compression by hammer and hydraulic press on site. A new topography was created. The surface finish pulls down the sky visually, fluctuating in continuous activity where it ceases to be perfectly clear to become clearly ambiguous. Transformation not unlike the energy of “place between” a Montana term for Lincoln.

The imagery that manifests in the piece with it’s planes of reflection brings forth everyday marvel. What was, no longer is.  It’s glacial, it’s geologic, it’s topographic, it’s mapping. If you see it it’s there. It’s as simple as that. That’s where your experience resides whether concrete or transcendental. You complete the experience..

I travel exploring place.  In Montana, the Blackfoot region and Lincoln in particular exudes a sense of grounding an earthiness. A place where even the weight of clouds is felt.  This region contrasts Montana’s “Big Sky Country”. The Blackfoot is a zone of compression and density from the masses of glacial till, to the sedimentary rock overthrust belts to the thick forested lands.  Here tales of time are revealed -the earth’s history - the history of life through place.

I find intriguing the parallels of nature and the human condition, but what captures my imagination most is the tension, pressure, and intensity of movement of the land and its people.

Pepos has been living and creating in Montana since 1998 - her ancestral home.
​