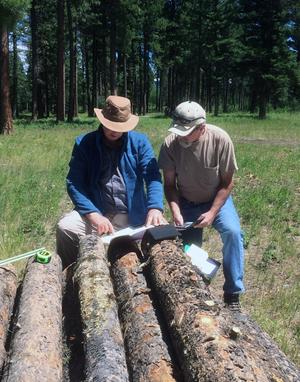 The whirlpool or vortex exists in nature - from blood flow in our bodies through rivers and weather systems to the formation of galaxies. As such it is the manifestation of energy in the universe.

The tree, which draws water from the earth through its roots to the sky via the trunk and branches, connects Heaven and Earth.

Water is returned to the earth via the mountains as rain and snow in a continuous cycle of renewal.

Here in the sculpture park, the Ponderosa pines are the dominant feature and obscure the mountains and sky. So in thinking about a work, I wanted something which was in contrast to the verticality of the trees but which in some way seemed to draw down the sky into the earth.

I have used the tree itself to do this and have laid each log down in a spiral which dips deep into the earth.

I have charred each set of logs in the pattern of the Ponderosa pine bark, a pattern that mirrors the path of sap up the tree, from single line to complex branching and into the black of the centre. These marks also reflect the wave patterns of water.

The whole whirling vortex shape is designed to pull the viewer, too, down into the earth, where it is possible to sit or stand on the stone deep in the centre and  look up at the sky.​