Alan Counihan's artist statement and his personal experience/thoughts during the sculpture symposium can be viewed at House of Sky. 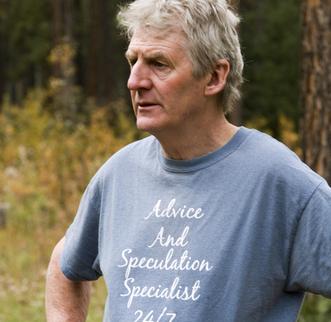 The work I developed for the landscape of Lincoln, Montana, takes its title from the memoir of a Montana childhood by the American writer Ivan Doig. In the course of that wonderful memoir Doig describes the blue expanse over Montana range land as forming the walls and roof of all of life’s experience ….. a single great house of sky. I wanted my work to engage with the sky of Montana as much as with the landscape.

The words of another Montana author, Norman McLean, on his night-time boyhood joy of being- not under the stars but among them- also played a part in the development of this new work as did those of Johnathan Raban in Bad Lands: an American Romance. Raban’s book traces the history of settlers and immigrants lured to the prairies of eastern Montana in the late 19th and early 20th centuries by the false promise of bounteous and fertile land. The dreams of these settlers were exploited by the railroad companies and the government so that the lives and homesteads of many ended in ruin. Shaped by these readings, the impenetrable form of House of Sky in Lincoln came to represent the uninhabitable dreams of those 19th century settlers. It is an uninhabitable ‘Dream Home.’

​Funded by the Tippet Rise Fund of the Sydney E. Frank Foundation

Over the course of twenty-five years the exploration of places, their communities and their histories has been consistently central to the artist's creative practice. Through works that have engaged not only with the materiality of those places but also with resonances of human habitation and experience he has sought to realize site-specific responses primarily through the medium of sculpture and three dimensional forms in private and public spaces or private and public landscapes both in Ireland and the United States.

Counihan's practice engages with the human relationship to nature and to the landscape, with how the later is inhabited, remembered, imagined. He has had several solo exhibitions of studio based work over the years and has been recipient of many grants and awards including the Pollock-Krasner Award. In 2012 he published "Townlands: a habitation" a creative exploration of an Irish rural landscape and its communities. Essays from his years in the Blasket Islands on Ireland's Atlantic coast were recently published in Archipelago 8 (2013)